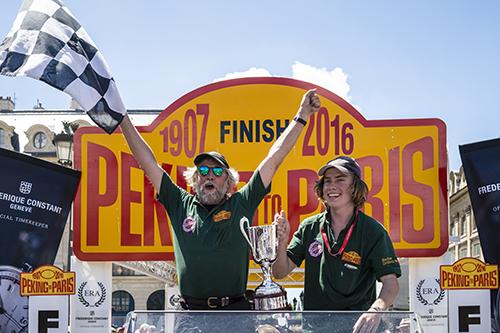 Burkes built 1929 Chrysler 75 Roadster driven by Bruce Washington and son Harry led the pack across the finish line for the Vintageant Peking to Paris race.

After a grueling 13,500km of gravel grinding and mudslinging, the father son team have taken the victory for New Zealand, and proved our point ~ Burkes is best.

Here's what the elated man behind the wheel has to say:

Hi Jason and Phil and all the team

Well we did it and you guys have made it happen for us. The car worked well and is still in great order.

We had the best built and prepared car on the rally, your name is now up higher than the best.

Thanks for everything you have done and supporting us. This is the start of bigger things and you are part of it.

Will be back in NZ in a couple of weeks. 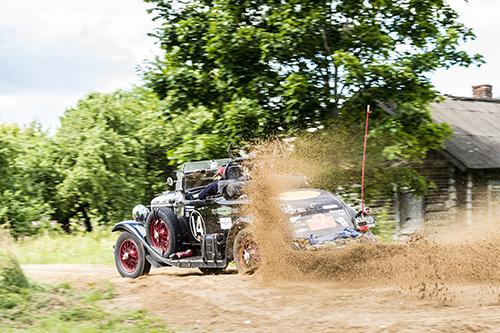 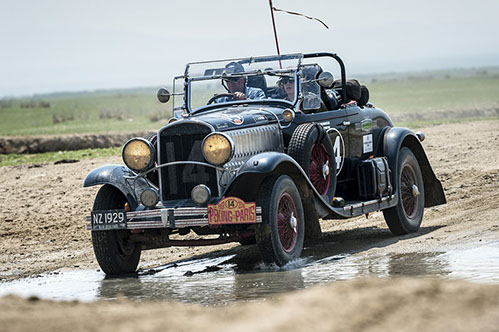 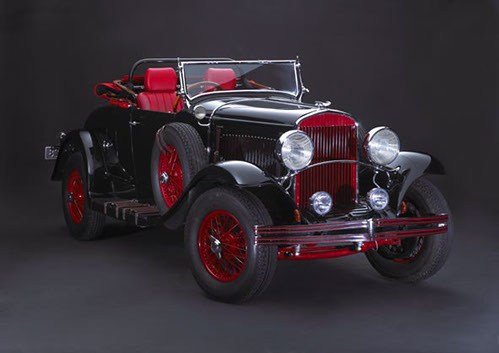 The newly completed and awesome Firebird convertible has officially been launched.  Commissioned by Woo Hoo! Tax Refunds, the sleek stylish beast also sports some serious specs...  Check it out in the Gallery.

KEN BLOCK'S 'HOONICORN’  – THE FAMED CAR OF 2014 – A FOUR-WHEEL-BURNING ROUSH YATES- POWERED MONSTER, HAS MELTED MINDS LIKE IT HAS TYRES.

OUR OWN JASON BURKE WAS THE MAN BEHIND THE PANELS FOR THE BUILD.

The 410ci Roush Yates powerhouse, breathing through a Kinsler eight-stack ITB system, pumps out 845hp through a bespoke Sadev sequential six-speed gearbox to all four corners – each one destined for smoking destruction as this vicious king of drifting assaults the tar with unparalleled prowess. All that coupled with it’s extreme stance and stand out styling leaves no wonder why the Hoonicorn became the most talked about car from 2014.

As you may know, Ken Block commissioned North Carolina-based ASD Motorsports to deliver the project, BUT it was Jason Burke the director and master fabricator here at Christchurch-based Burke's Metalworks who was chosen as the man to transform the concept sketches into actual bodywork for the bespoke showcase beast.

Jason was at the top of the list for ASD’s director Ian Stewart, also a Kiwi. “For sure, his work impressed me, but when you take on a project, things actually need to happen and you need people with the right approach, work ethic, and attitude. I could have gotten local guys over here to do the work he did, but I wanted his input and influence as well.” While there’s no shortage of talented sheet-metal fabricators in North Carolina, Ian wanted someone with hot rod // street-rod sensitivity and experience to bring aesthetic, style and cohesion to it’s otherwise strongly function defined form. As Ian put it “Jason knows what looks right and what doesn't,". 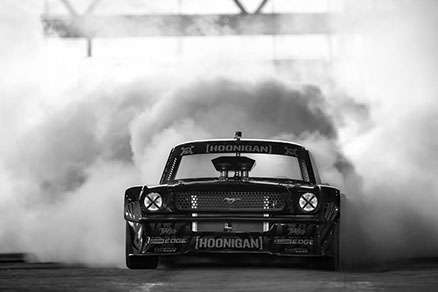 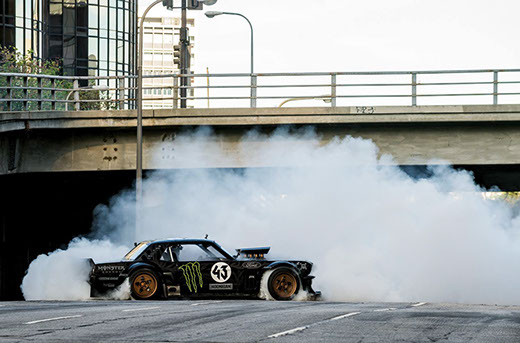 Jason was invited over to work on the top-secret project, but there was a lot more to it than jetting over with a welding torch… To get the body proportioning correct, the wheel specs all had to be established before he could start, then coordinating other business and family commitments was easier said than done. Victory saw Ian fly Jason out to stay at his house and work at the ASD facility in North Carolina.

Jason recalls "I had to turn my brain off New Zealand and start looking at what they wanted. In New Zealand, a client may want their Mustang's guards flared, but the end result is always aesthetically a Mustang. Here it was the total opposite - the design is tough, raw, and the absolute opposite of the traditional 'show' build. The whole look of the Hoonicorn is functional, and everything has a purpose – For example, the guards were designed with the intention to extract enormous quantities of smoke as efficiently as possible, as were the huge vents behind the front wheel arches”.

The Hoonicorn design brief was specific however. Jason's job was to develop the sketches to achieve the right look and maximise functionality. As long as the car had the desired look [ A hard, maniac monster of precision machinery bent on savage incineration of rubber... ], he was let loose to do whatever it took to make it work. 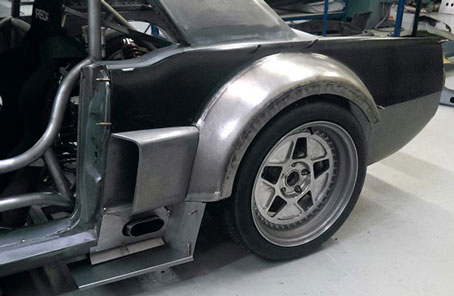 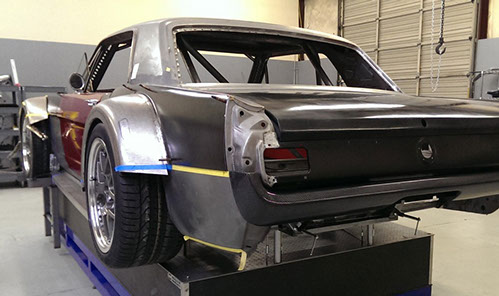 Once the original red donor Mustang’s steel doors, boot lid and front guards were installed for fit, aftermarket steel guards were chopped and modified. Guard extensions were then designed to complex criteria - height, width, rolling diameter and suspension travel all taken into account. All four flare extensions were fabricated from one piece of sheet steel. Templates were made and modified until Jason was satisfied with how they worked before the final steel weld up was done. A deep front valance was also hand formed from sheet steel to seamlessly integrate with nose cone, guards, and overfenders. The guard extensions are 'bolt on' units fastened by Dzus clips. In the event of an accident. the flare can be quickly removed and replaced.

Like most of the bodywork, the final panels are cast in carbon fibre. Ian explains "Once the shapes were finalized, the majority of the components that Jason made were used as a plug for making moulds for the carbon. The panels were effectively destroyed in the process." Though Jason’s master panels themselves are no longer, they live on in carbon and play an absolutely critical part in the forming of the finished Hoonicorn.

The planning, work and level of skill required to execute the task is mind boggling. Jason’s two whole solid months immersed in planning, designing and fabricating the bodywork betray the level of craftsmanship that went into paneling the Hoonicorn.

For Jason it was a surreal experience, such was the secrecy surrounding the project, while working on such an elite car that may not have ever seen the light of day.

All in all, an inspiring experience to fuel new ideas and projects back in New Zealand. Watch this space!

Seeing is believing – buckle up and watch the official Hoonigan footage of Ken unleashing the Hoonicorn wild on the streets of LA!  This is ultimate indulgence, Insane rubber inferno at it's epic best! Phenomenal performance, mind bending skill and monolithic money spend... 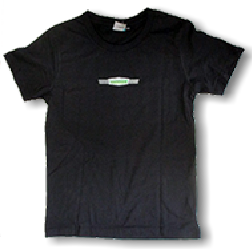 Get one for every day of the week! 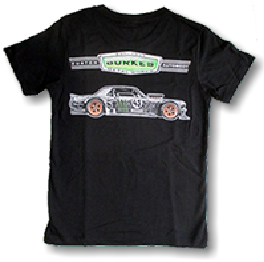 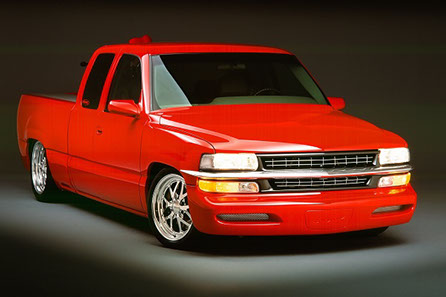 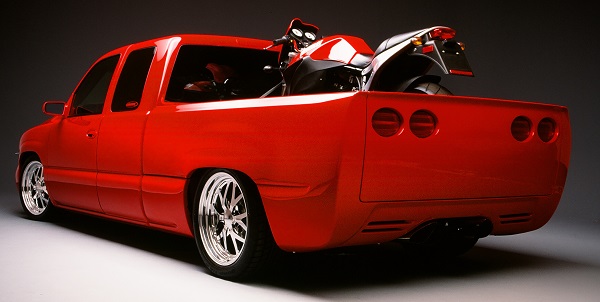 "Metal master Jason Burke was over on a walkabout from NZ and we put his skills to work. He re-skinned the tailgate to incorporate the tail lights and spoiler, which we modeled up in clay on one side, then sheet metal on the other until we got the shape we wanted. We even shortened the floor of the bed so the tailgate would transition nicely into the roll pan. We flared the rear fenders and made a hidden storage compartment (in the wasted area of the bed) that conceals the gas cap and the door can be used as a step!

As on our yellow truck we made a steel cowl panel that hides the wipers. We made an aluminum center grill bar that wraps around the sides and tapers off at the front flares. The vette theme was carried into the steel front bumper and door handles. Magnuson supplied one of their excellent supercharger kits.

This was the 1st generation of truck to use the Vette based LS engines so we used that as our theme to build an all American Sport Truck. Buell supplied the American Sport Bike. Due to a labor strike in Detroit timed around the big roll-out of these new trucks, we only had 7 weeks for the build. "

Go to article on Budnik site » 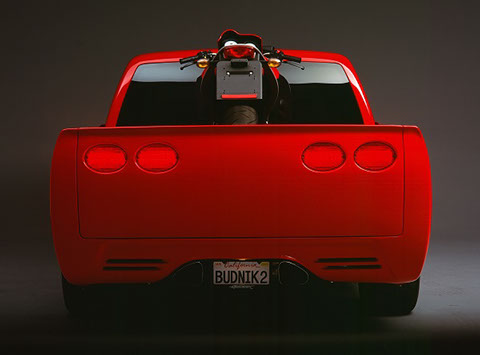 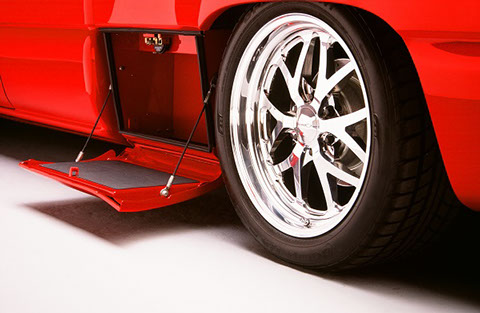 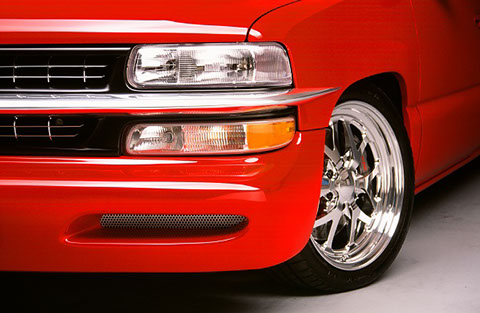 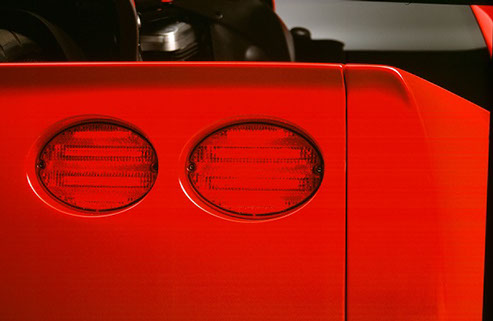 With 10 years experience on conversions, Toyota, Nissan, Suzuki – you name it, we can convert it. Whether you're a tradesman or farmer, talk to us about your ideas, bring it in, we'll work it out, set it up and cut it down for you! 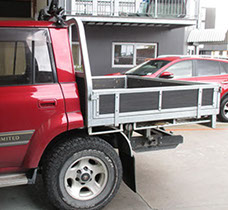 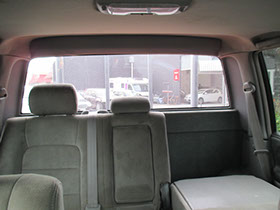 Life is short – live your dream and make this machine yours!  Burkes is now building this massive 1 off  custom Mustang. Stand out from the rest!  You can't just buy this type of custom, it is hand built with love and precision and guaranteed to turn heads... Book in with us and get your say on custom finishing options and specs.  Flick through the colours above for an idea, then make your dream come true!

This clip was a pre paint, power tryout – who's going to wait for paint before planting foot?...

A Passion for Perfection